While the south-east trade wind blows the whole year through and actually is a harmless and even pleasant event, in case of the cyclones the situation gets serious. 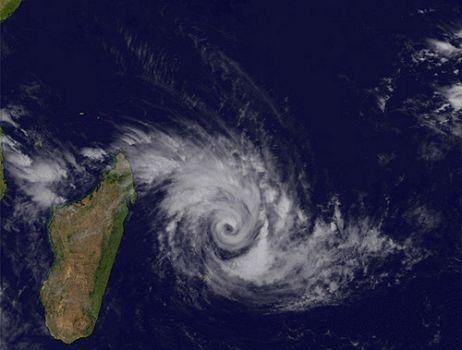 They are also winds that are originated by the strong sun radiation, but they are tremendously more fiercely and destructive.

Cyclones are originated during the months January up to March, when the sun is already returning from the southern tropic in direction to the northern tropic; While the sun is positioned for a short time vertically in the sky above the equator, thus only passes it briefly, it spends more time in the area of the tropics, as the sun gets there, turns around and slowly returns . The consequence is that the air and water temperatures strongly increase.

According to statistics, Mauritius is in the centre of a cyclone only every 5 years. Still, every year the island is hit by the remnants of 3 to 5 storms. Most frequently, cyclones form on the Tropic of Cancer and the Tropic of Capricorn where the body of water heats up to 26°C for longer periods of time.

During the period of the cyclone the water temperature and on the surface evaporates much quicker than the water in underlying layers. High cloud towers build and are put into motion by the rotation of the earth. These clouds bring storm and heavy rainfalls.

If such a cyclone approaches the island, one should immediately look for a shelter. The rural inhabitants that live in some instable huts, search for shelter in public office buildings or churches. Hotels have to bring into safety everything what is not cast-iron. On the sea, metres-high waves are formed, torrential rainfalls descend on the island, the wind takes the roofs and the trees with it. The spectacle only takes a few hours, then the weather calms down again and the extent of the destruction gets visible.

There are only extremely destructions if the cyclone straight passes over the island, thus with its eye. But also when a cyclone passes Mauritius at a distance of a few hundred kilometres, the consequences are noticeable on the island: there are stronger rainfalls than usual, the wind blows fiercely and the sea breaks some massive waves against the coral reefs and/or the edge of the island.

Storm warnings are made public on TV and radio. On the free call 96 you will be able to receive the latest news and helpful information in several languages.

The cyclone warning system in Mauritius is structured in 4 classes:

Class I: Issued 36 to 48 hours before Mauritius or Rodrigues is likely to be affected by gusts reaching 120 km/h.

Class II: Issued so as to allow, as far as practicable, 12 hours of daylight before the occurrence of gusts of 120 kilometers (km) per hour.

Class III: Issued so as to allow, as far as practicable, 6 hours of daylight before the occurrence of gusts of 120 kilometers(km) per hour.

Class IV: Issued when gusts of 120 km per hour have been recorded and are expected to continue to occur.

Issued when there is no longer any appreciable danger of gusts exceeding 120 km per hour.

Preparedness And Precautions in The Event of a Cyclone

During a cyclone warning class l

During a cyclone warning class ll

Upon the issuance of a cyclone warning class lll

During a cyclone warning class IV