10 Must see Churches in Mauritius

Mauritius island offers an inexhaustible source of architectural prowess in the form of temples, churches and mosques.

For those who love exploring the culture and traditions of the destination they travel to, Mauritius offers many pristine churches dating back to the French and British periods that are to be on the must-see places in Mauritius.

The churches are eye-catching in wherever region they are found. Also, around 30% of Mauritians follow Christianity, the second largest after Hinduism according to the census made in 2011. The Mauritian Creole and Franco-Mauritian groups are mostly Christian. And also a significant part of Sino-Mauritian ethnic groups follow Christianity. This is why Mauritius is dotted with Anglican and Roman Catholic churches.

If you are wondering how to decide which churches in Mauritius to visit, here is a list of the most famous ones which will surely provide you the desired serenity and tranquility on your vacation. The people of Mauritius are quite religious and follow different religions. So, when you visit the churches make sure to respect the piousness of these places.

Discover The 10 Must See Churches in Mauritius:

Located in Cap Malheureux, it is one of the most popular tourist spots in Mauritius.This place gets its beauty from the little church with the red roof close to the blue lagoon. The Church is situated ideally at the very northern point of Mauritius offering breathtaking views of the 5 northern islets of Mauritius. 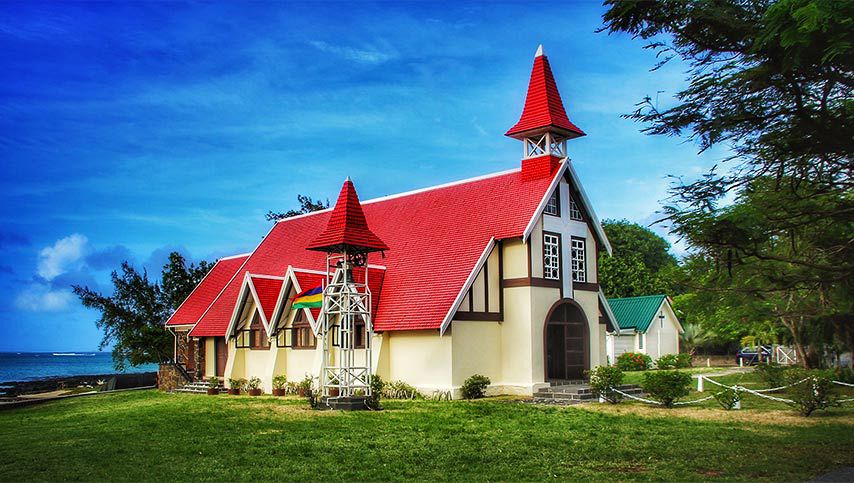 It was here that the British landed in Mauritius over 200 years ago. Many visitors go to the Village of Cap Malheureux due its amazing location and beautiful setting. You can have the beautiful view of the crystal clear ocean, see the small Islands in the Northern coast of Mauritius and beautiful beaches.

You can shoot romantic couple shoots over there as the whole environment gives that vibe. Also, people can get their pre-wedding shoots done here. 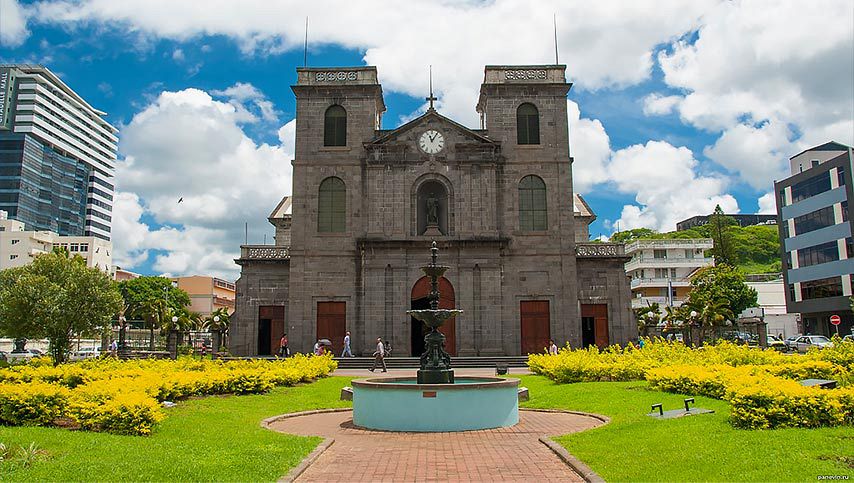 The church was rebuilt in 1814 after a series of exhausting cyclones inflicted damage on the walls of this building. The renovation was based on its original plan itself, and the Latin cross continued to be the defining feature of the church. Previously, there used to be an old fountain in front of the cathedral. It served the purpose of carrying water from Pouce stream towards the city. The fountain is still present today but doesn't carry any water.

The church includes several statues of the saints and is also the burial place of Catholic bishops, including the Mauritian Cardinal, Jean Margéot. On the 25th of August every year, the Cathedral commemorates the patron of the diocese with feast day celebrations

The French priest Blessed Jacques-Désiré Laval, affectionately known to Mauritians as Père Laval (Father Laval) was sent to Mauritius, in 1841, while Mauritius was still a French colony. The Catholic priest was credited with converting 67,000 people to Christianity during his 23 years in Mauritius. Believed to have the ability to miraculously cure people, Father Laval was the first person beatified in the pontificate of Pope John Paul II.

Built-in 1872 by famous architects Mr. Rampan and Sir Virgile Naz, Ste Therese Church is located in Curepipe. With vibrant windows and simple interiors, the church is surely a delight to the eye for those who love to witness the wonders of architecture. You can also attend the services held every Saturday. While you are strolling around the city to visit various places, do pay a visit to this church. Though the church looks gothic at first glance the interiors are mesmerizing enough to hold your attention. The best part of this church is that it’s mostly quiet and not that crowded. Head here to attain solace and calm. 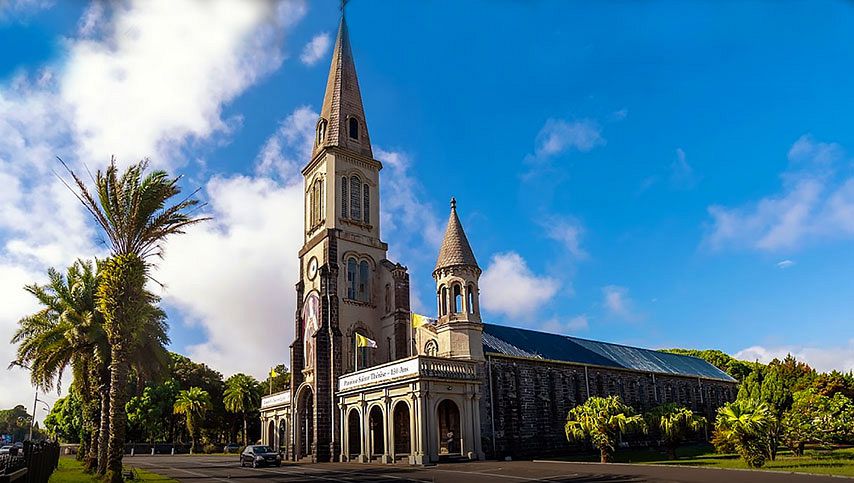 With its tall main spire, two side spires and prominent position on a Curepipe square, the striking Roman Catholic Saint Therese Church has dominated the town landscape since it was completed in 1872. Inside, tall stained glass windows and an impressive white vaulted ceiling create a serene sense of light and space.

Located in the south east part of the island, Notre Dame des Anges church, boasts a uniquely painted butter-colored tower. The original church was built in 1849, but it has been restored several times over the years. The silhouette of this church dominates the skyline of Mahebourg. You can visit it throughout the day and make an offering to the stature of the beloved missionary Pere Laval. 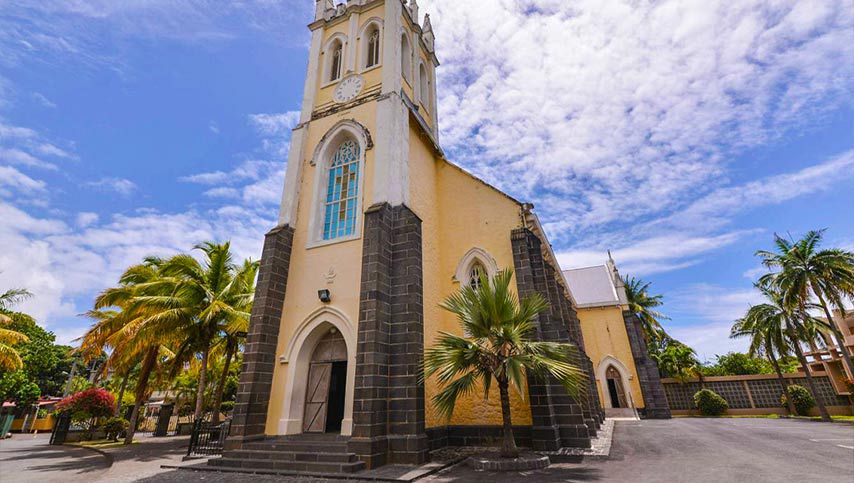 A statue of Père Laval and a gate bearing a ‘Beware of Children’ sign welcomes visitors to the beautiful, pale yellow Roman Catholic church.

Completed in the year 1864, Notre Dame de la Visitation is found on the Royal Road near La Caverne in Vacoas. As it was observed with many other old churches, this one too went through quite some changes in the structure. When it was newly constructed, the church had a big cross on the side but no bell tower. 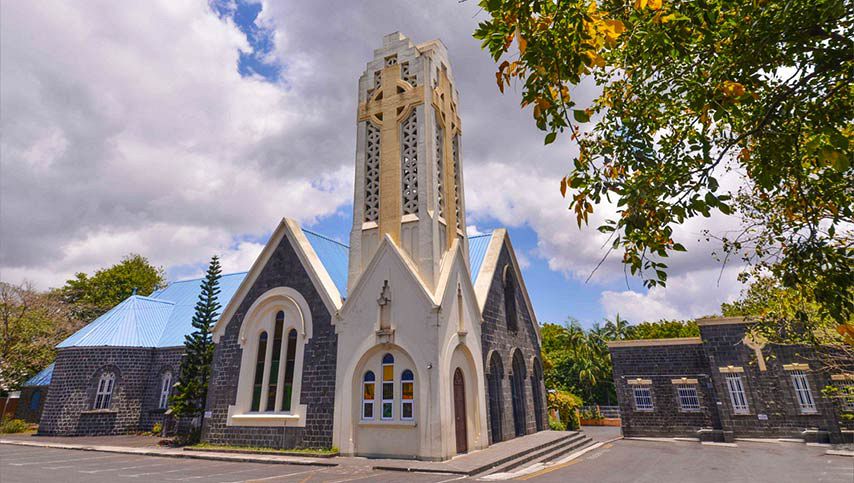 Later, probably in the 1930s, a huge tower was added to the left side with its bells. This imposing square tower is considered to be the most defining feature and the highlight of the church. The rest of the structure remained mostly the same, plus some accompanying separate buildings were also constructed at the back and front.

Completed in 1942, The Chapel and Shrine of Marie Reine de la Paix is situated on a hill at the outskirts of the city. This religious building is very popular not only with the locals, but also with tourists who come to admire the building's modern architecture. The church is of historical importance because Pope John Paul II officiated his first mass in October 1989 when he visited Mauritius. 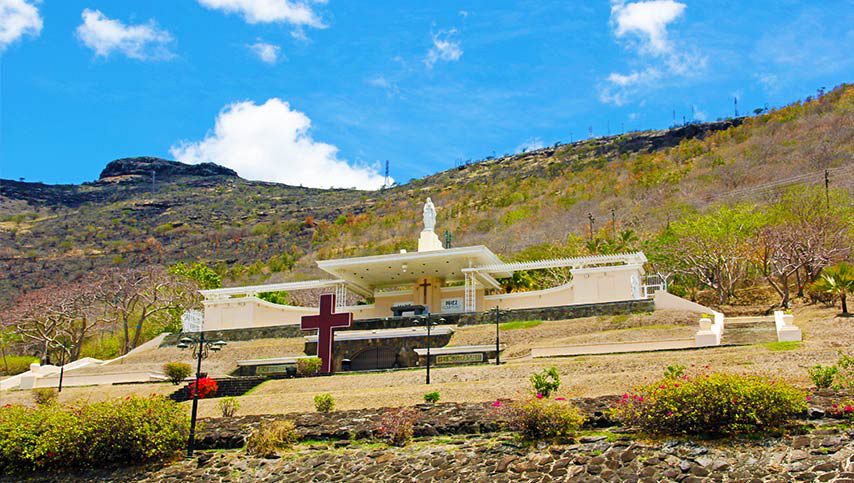 The chapel is surrounded by a green area from which you can enjoy a great view of Port Louis.

There is a beautiful monument of the Virgin Mary overlooking the whole city of Port Louis on the hillside of Signal Mountain. Look up from anywhere in the city and you will see this prominent site dedicated to Mary. There is an open air church at the top surrounded by a pleasant ornamental garden. The statue of the Virgin Mary is made of white marble and sits atop the church.

Saint James Cathedral is one of the famous landmarks in the capital city, Port Louis. This octagonal spire of Saint James Anglican Cathedral was used by sailors who entered the harbour to ascertain their position easily. The church was opened on Christmas day in 1831 and grew so much in popularity. 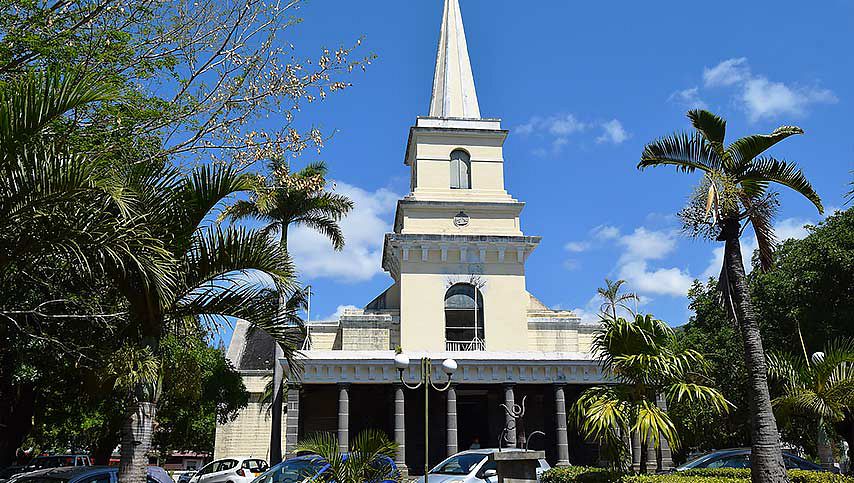 Due to the increasing number of visitors and tourists, two wings had to be added to the church in 1846, so that it could cater to the needs of increasing congregation. Even today, Saint James Cathedral stands proud and is a well-loved emblem of Port Louis

The church is located in Flic en Flac. Situated on the banks of Black River Gorges, the church is a famous destination for all weddings among Mauritians. The interiors of this church are very impressive, and the surroundings give you a respite from your routine. 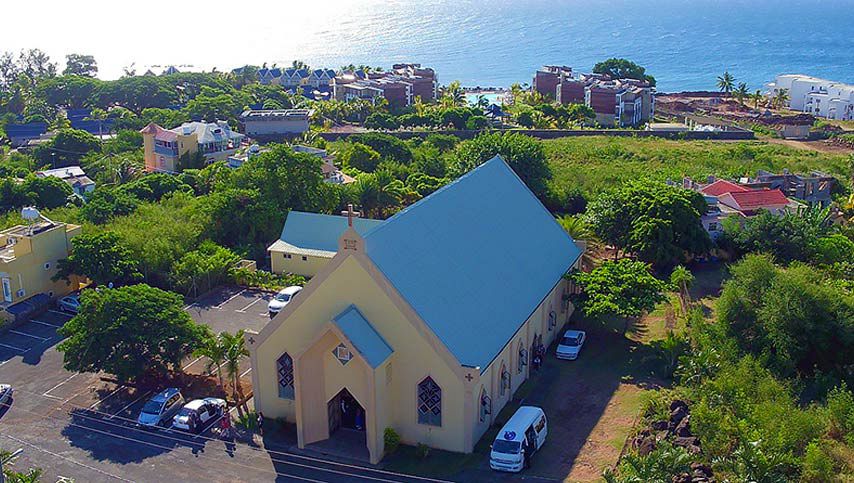 From morning prayers to reading the bible, every event is held with great pleasure. Many people attend the mass and the choir is sung cheerfully. The church was constructed in the year 2000 and has gained popularity over the years.

Located a few steps away from the botanical gardens of Pamplemousses, the church of St. Francoise d'Assise is a beautiful church and is worth visiting. Known to be the oldest place of worship in Mauritius, the church dates back to the year 1756. Its stained glass windows and surrounding gardens make it a pleasant church, and the atmosphere is peaceful. Also, just a few metres away from this church lays a graveyard that has been guarding coffins for more than 200 years. 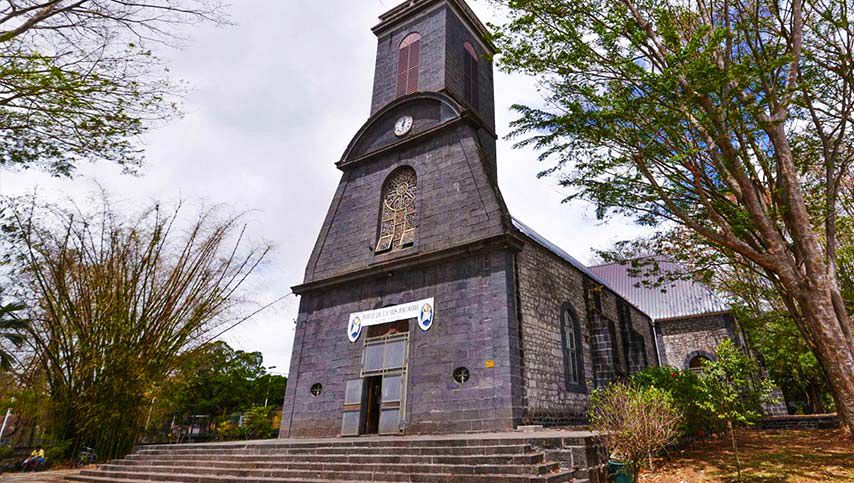 Since the French rule till the British Colony there have been quite some very strong and exemplary Churches built throughout the island, and these structures, till now, are as dominantly eye-catching in wherever region they are found.