It is important to know that in Mauritius it can rain in one area while only a few kilometers away the sun is shining and no cloud is in sight.

If you wake up in the morning with gray sky, don’t worry. Go for a shower, have a breakfast and probably by then, the sky will be clear blue.

Rain occurs in all months but the wettest period in Mauritius is from December to April. During these months tropical cyclones occasionally strike the island or pass near enough to give very heavy rainfall and strong winds. 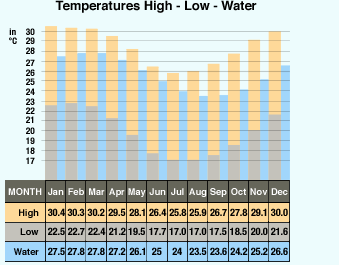 Long-term time series of rainfall amount over the past century (1905 to 2007) show a decreasing trend in annual rainfall over Mauritius.

In fact the average rate of decrease per decade is around 57 mm. The total decrease during the last ten years is about 8% when compared to the 1950s.

Annual rainfall over the outer islands indicate significant variation from year to year but long-term analysis do show decreasing rainfall trend, though lesser than the main island Mauritius.